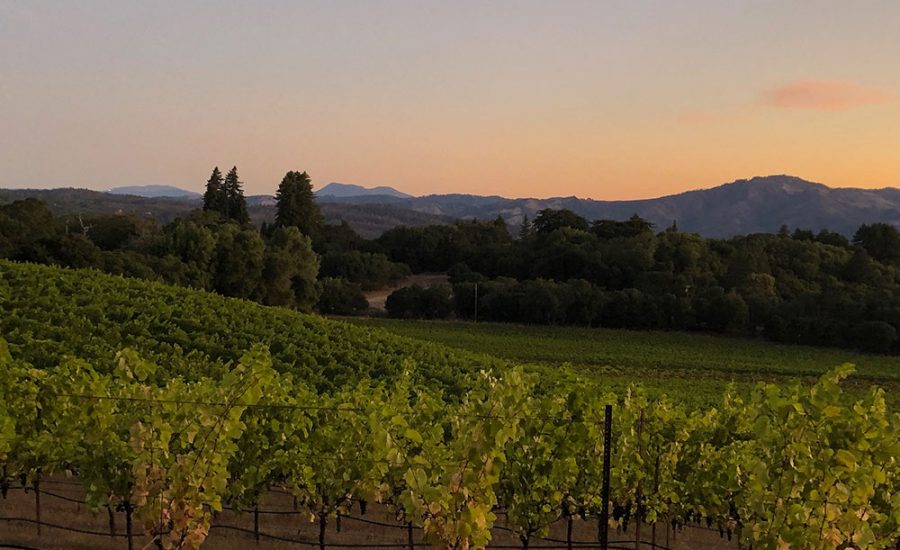 The day began a little differently than most days of harvest do:

We weighed out for tare the two ¾-ton fermentors and loaded them into the back of my bullet-riddled pickup truck, evacuated the air from the vessels with carbon dioxide snow, and strapped the lids down tight. Once again pointing the nose of said truck easterly, we headed up to one of the highest vineyards on Sonoma Mountain, the storied van der Kamp Vineyard for a first-light pick of whole-cluster, carbonic maceration Pinot Meunier.

A little background to this vineyard may be required for those who haven’t heard of the history and specialness of vdK, both the vineyard and the people who have in past times and those who do now live on this storied site. It has been the meeting ground for millennia of native American peoples and remains so to this day with a sweat lodge and gatherings still taking place. The current stewards of this spiritual site, vignerons Martin and son Ulysses van der Kamp and their family, have only been tending to this land for a fraction of its inhabitance, though the family now has 3 generations of history firmly rooted in the fertile volcanic soils of this ancient meeting place. It is hard to describe the history, the specialness of this home to those who so well honor the past while building a better future for not just the wine lovers of the world (the wine can be on your dinner table for many tomorrows to come), but for the world in general. You see, the van der Kamp Vineyard does not just grow grapes, it grows memories that can be carried forth by those whose lives are touched by the gentleness and profundity of this land and the people who inhabit it. Suffice it to say I will chronicle just one example of transformation. You will have to see this site for yourself to gather a more true picture of just how special this vineyard is.

My wife and I arrived at the vineyard while the sun was just a rumor in the eastern sky. The air smelled of pungent earth and ripe fruit, soon to be mingled with wafts of sweat of what would be our picking team: the van der Kamp family and their co-inhabitants and workers of the vineyard (now also 3 generations deep), my family and a few select friends of ours. One eager young lad, Jesus, joined us from Jessies Grove vineyard and winery in the Mokelumne River AVA. He was one of two toilers named Jesus, the other being one of the multiple-generation families who also live on the site and tend both the grapes and the gardens, animals and orchards that provide the inhabitants of this place with sustainable sustenance. The mosquitoes and other assorted flying insects were also there, fellow inhabitants of the land, rising up from the nearby spring seep to greet us. Mara and I sprayed on a repellant, happy to coexist with these inmates but not wanting to tempt them to our discomfort.

We all started picking in unison as first light allowed us to extinguish our headlamps. The sky gave off a spectacular show of majesty as it began to fill the sky, with pink and ochre colors spreading across the flanks of the old volcano crater. There was appreciative talk about how beautiful the sunrise was as we steadily clipped our way across the rows of perfectly-ripened Meunier grapes. Then Malia van der Kamp, youngest of the van der Kamp siblings (vineyard manager Ulysses being the oldest) and shoulderer of many 45-lb. lug boxes overhead to lift into the truck-bound fermentors (yes, she is macha), said to look at what was overhead – not just the first light of day, but a huge phalanx of dragonflies overhead, diving and careening across the woodsy-perfumed air just above us. As were we, they were also gatherers of the land, harvesting their crop of the afore-mentioned insects, displaying a simple act of nature and sustainability.

Dixie van der Kamp, matriarch of the family, was impressed not only by the sight of morning light glinting off the wings of the dragonflies before the light touched us, but by the symbolism of these acrobatic, beautiful creatures. She related that dragonflies represent transformation, and that this was a harbinger of a special thing to come: sunlight into grapes and grapes into wine. The speech of the land was literally in our hands as we placed the whole cluster gently into the vessels that would make the transformation complete. We picked, the dragonflies danced and glinted, and I, too was transformed. Another day of harvest, and I am a richer man for having been there, on the top of Sonoma Mountain, harvesting with the van der Kamp family and friends. 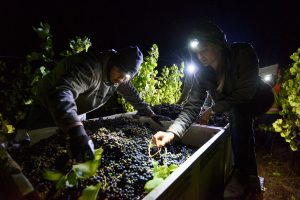 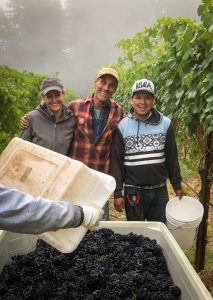