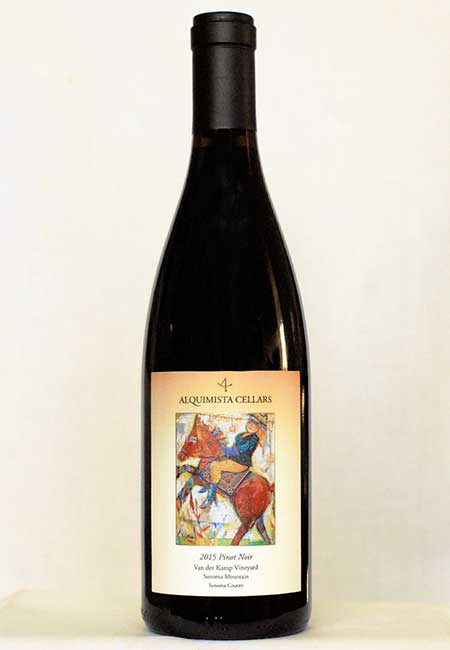 The van der Kamp Vineyard produces one of our most terroir-expressive wines. Vintage compels the ever-changing magic of this high Sonoma Mountain vineyard. The sparse volcanic soil can be stingy depending upon the climate influences on any given vintage. But the Martin van der Kamp family, with the vine husbandry headed by son Ulysses, consistently meets the challenge. And challenging is the best word to describe the 2015 vintage.

A scant yield of less than half than normal characterized the 2015 vintage. And also 25% whole-cluster fermentation drives this most elegant of our vdK bottlings. Moderate color with a bright hue announces the delicate floral and red berry notes on the nose, laced with hints of spiciness from the ripe, brown stems. On the mouth the presentation is balanced, with tannins matching acid and a solid fruit core and leading to a long, smoothly sculpted, raspberry-tinged finish.

VINEYARD: This is one of the highest vineyards on Sonoma Mountain, reaching 1800’, with some of the oldest Pinot noir and certainly oldest Pinot Meunier vines in California. The soil is variable, but mostly rocky volcanic loam, with plenty of obsidian (sometimes in the form of arrowheads) and a north-facing aspect to diffuse the light.

HARVEST: Gathering began earlier than ever recorded on the mountain. Starting the first week of September and continuing into the first week of October, the tiny crop of less than one ton per acre meant seeds and stems were not as ripe as we would have liked but with excellent concentration in the small berries and open cluster architecture which was induced by cold, rainy weather during the entire month of flowering.

FERMENTATION: Peak temperatures in the small open-top vats were much lower than normal with the wild primary fermentations being somewhat shy this year. This was fortunate in reducing extraction of seeds and stems and brought more balance to the wines. No crushing of destemmed fruit helped with tannin management. About 25% of the overall fermentation was conducted in 100% whole-cluster lots or maceration carbonique. These whole cluster lots were finished with a pure Southern Burgundian yeast isolate known as 71-B. Malolactic fermentation was 100% indigenous and finished in barrel.

BARREL AGING: We chose to go with very little new oak, using a fair amount of once- and twice-used French cooperage. The fermentations were mostly completed in barrel, being pressed off at between 10-12 Brix for the whole-cluster ferments, and zero to two Brix (% sugar) for the more traditional destemmed fermentations. This allowed us to leave the wines essentially on the lees for about 11 months before bottling without fining.