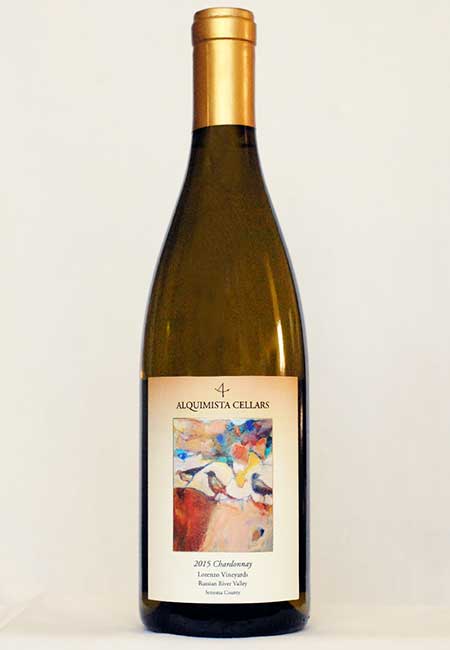 John Bazzano, owner of Lorenzo Vineyard on the Santa Rosa floodplains, has for years with wife Phyllis and his sons and grandsons been growing some of the most profound Chardonnay in the Russian River AVA. Greg La Follette began working with Lorenzo fruit in 1993. Twelve year later, Greg was able to source Lorenzo Chardonnay for his fledgling venture Tandem. Ten years after that, Greg and his partner Patrick Dillon were equally delighted to receive Lorenzo fruit for their newly formed Alquimista Cellars. The inaugural year of 2015 saw near perfect weather with only a few challenges due to drought conditions. The results testify to the equilibrium in the relationship between the grower/winemaker, manifested by what’s in the glass.

As wild and sauvage as the yeast that fermented these grapes, the initial impression is one of muskiness, savory herbs and hints of ripe guava. As the wine marries with the air in the glass, one senses a veritable potpourri of aromas and flavors. Wildly rich and sultry on the palate, the texture is hedonistic, with the energy and tension you might expect from a red wine. The finish is long lasting with an almost wintergreen cooling that invites another sip. Try even decanting (we encourage our friends to play with their wines)!

VINEYARD: Located in the heart of the Russian River, John Bazzano’s vineyard is among the oldest of Chardonnay plantings in our region. Our section of the vineyard was re-trellised to a quadrilateral system, spreading out the bud load & creating small, open clusters/tiny berries. The moderately vigorous loamy clay soil seems to demand a greater bud load on each vine, giving balance to the vineyard & resulting fruit. About 30% of the fruit was from vines that were own-rooted rather than on rootstock, an absolute rarity in the Russian River.

HARVEST: The 2015 vintage was tiny but ideal, with no hiccups until late in the year when the dew point turned south on us. The result was a light fleck of Botrytis that served to enhance the richness of the wine and increase the feral aromatic nature of this bottling.

FERMENTATION: Due to rogue microbes in the juice during the early stages of fermentation, the finishing wine yeast struggled mightily in 2015! The lees started showing signs of stress and in January, the wine was racked clean off of the fermentation sediment.

BARREL AGING: the wine was aged clean off the lees and in 1/3 new French oak barrels for 10 months. This is the only vineyard that we explicitly match with such precision.