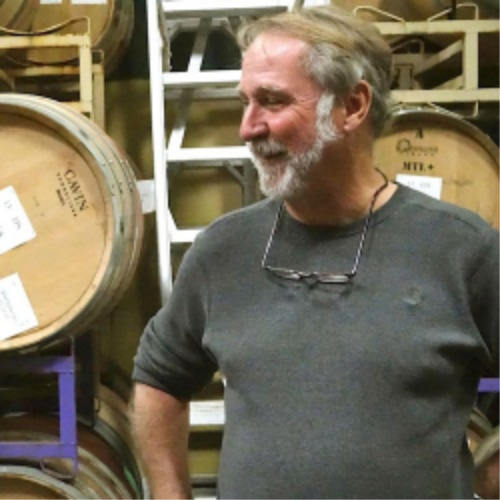 Patrick Dillon has traveled an altogether different path to becoming Alquimista Cellars partner and co-winemaker. A Pulitzer Prize winning journalist, writer, author, editor, web content director and strategic consultant, he has also been a vice president of a global software firm and executive producer of a global, web-based data visualization design firm. He is also the co-author of a cookbook: “Open Range“.

So how and why wine?

In 2000 Patrick and his wife Anne purchased a small farm in Sonoma County. This is where he met Eric Sussman, whose soon to be award-winning Radio Coteau label was in its nascent stage. Eric needed someone willing to provide “sweat equity”; thus Patrick’s passion for winemaking began in the early hours doing punch downs in the cellar with Eric. “He kept telling me how romantic winemaking was,” Patrick recalls. “And I kept reminding him of what a great sense of humor he had.”

On the other hand, Eric imbued Patrick with a sense of maintaining great grower relations, unwavering fastidiousness, not only in maintaining a safe and sanitized workplace but in monitoring fruit as it proceeds from harvest, to ferment, to barrel and bottle. But Patrick also brought his own attributes to winemaking, having served as a tank commander and platoon leader in the U.S. Army and as a crewmember and cook aboard a crab fishing vessel in the Bering Sea. The latter experience produced an award-winning best-selling book Lost at Sea; but both experiences prepared him for his trademark equanimity in the face of great pressure, for indefatigable regard for the consequences of even the smallest mistake, and the ability to communicate in order to envision common goals and achieve them.

“I saw in Patrick a world of experience that really rubbed off in working with growers even during the toughest harvests and in our winemaking,” Greg says of his partner and fellow winemaker with whom he first worked during the difficult harvest of 2011.

Patrick went on to work with Miramar Torres in Sonoma County and later ADAMVS, the high-end cabernet sauvignon producer on Napa County’s Howell Mountain. Throughout this period the respect and friendship between Patrick and Greg continued to grow and evolve into a “what if?” dialogue that, in time, became the antecedent for Alquimista Cellars.

“I feel privileged to partner with Greg on this inspiring venture that promises to ask everything from our synergy and focus,” Patrick says. “It’s a commitment I cannot see making with anyone but Greg.”