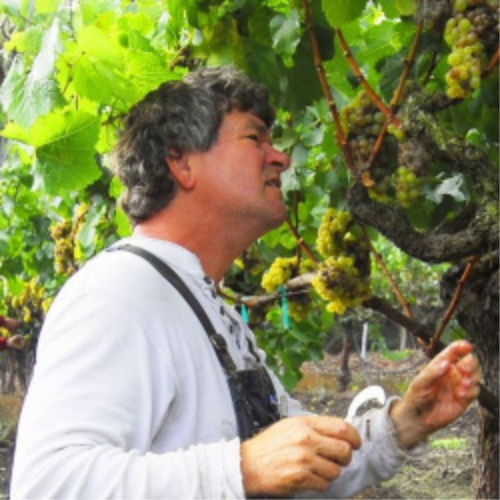 Known throughout the wine world as a “vine whisperer,” “cellar magician,” and tireless coaxer and protector of his handcrafted wines, Greg La Follette bears the bona fides of the alchemist. A former seminarian and biochemist with degrees in Plant Biology and Chemistry, he was an early AIDS researcher at the University of California San Francisco before earning his masters degree in Food Science and Technology at the University of California Davis. It was at Davis that Greg became fascinated with “mouth feel” and literally tore wines apart, determined to decode the chemical riddles of taste and texture, especially in Burgundian styles of Pinot noir and chardonnay.

Furthering his pursuit, in 1991, Greg moved to Napa’s Beaulieu Vineyards, where, as research viticulturist, he fell under the mentorship of André Tchelistcheff, considered the godfather of California winemakers. The Russian immigrant had his own antecedents in alchemy, having studied agricultural technology in Europe and at the Pasteur Institute in Paris, where he had steeped himself in oenology, fermentation, and microbiology. “We had similar technical backgrounds,” Greg recalls, “but André challenged me. He said: ‘You can go on being a researcher; you can go back to Davis, but if you are going to work with me you are going to learn the heart and soul of wine.’” Greg literally took his mentor’s admonition to heart. For the past 24 years, he has focused on agricultural management, enjoying close and extended relationships with top growers and fellow winemakers throughout northern California, Oregon, Europe, South America, and Australia. He continues to work with these growers today. Alquimista Cellars is the beneficiary of a rare equilibrium between our growers and ourselves. They have our continued support. We obtain their best grapes. The results have been distinctly expressive and supple Pinot noirs and chardonnays, attesting to sur lies aging and battonage, a craft practiced with both technical precision and experimentation and always passion. These are some of the techniques that have earned Alquimista’s winemaker the reputation as “a winemaker’s winemaker.” In November 2014, the influential Vineyard & Winery Management magazine named Greg one of the most admired winemakers in North America.

Greg has designed and redesigned fourteen wineries worldwide and was the consulting winemaker for the University of California Davis’ “teaching winery”. He has consulted for Kendall-Jackson, starting its La Crema and Hartford Court brands. Later he launched Flowers, turning it into a cult brand, featuring its gravity-flow “green” production facility that is still considered state of the art. He went on to manage wine operations at DeLoach, and founded Tandem wines that he produced in a converted apple processing plant in Sebastopol, California, where Alquimista Cellars is now located. Following his tenure at the award-winning brand that bears his name, La Follette, Greg now presides over the wine making operations at Alquimista Cellars.

Greg continues to be one of the most sought after consultants, educators, and adventurers in the wine industry. His quest for adventure has also led him to form a new partnership to focus on an even more exclusive brand: Alquimista Cellars. Greg considers this new venture as his destiny, a culmination of more than two decades of challenging industry standards and setting new ones. Only small harvests from choice single vineyards are selected for Alquimista wines. They will be processed with Greg’s no-holds-barred repertoire of crafting techniques to fashion wild but taste-friendly, multi-layered wines that reveal themselves to be indelible yet enigmatic, mysterious yet seductive; wines manifesting an equilibrium that only a master alchemist could achieve. At the same time Greg is fond of quoting Vladimir Nabokov: “There is no science without fancy and no art without fact.” Finally, Greg adds: “We’re pulling out all the stops to grow and to explore and to craft the most expressive wines that I am capable of.”